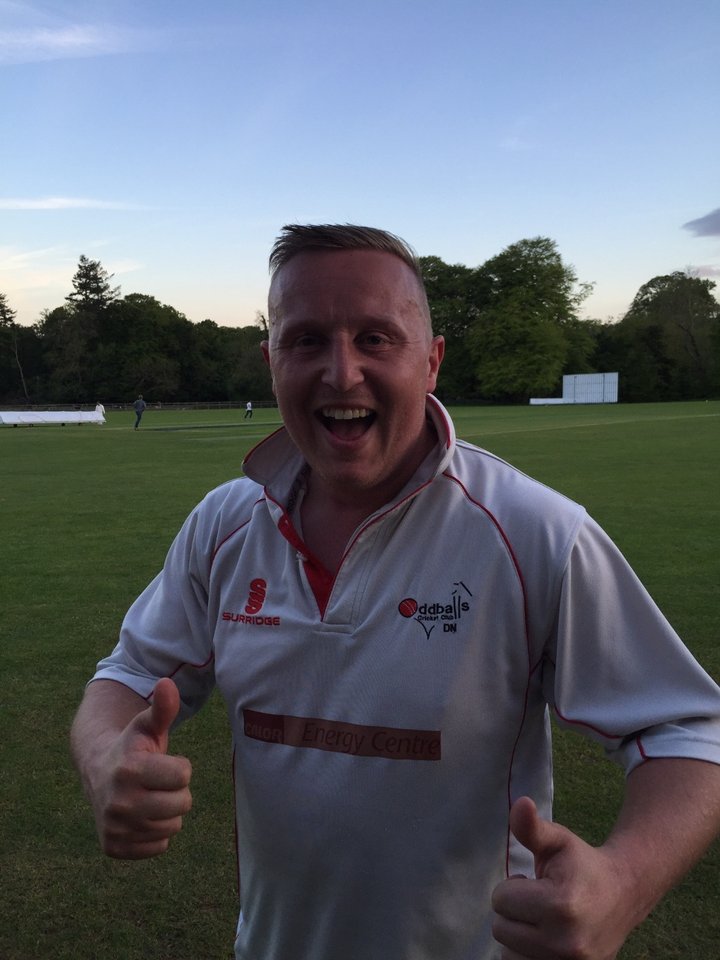 Oddballs beat a strong Cornwood outfit to make it three out of three in the league.

Cornwood won the toss and chose to bat on a glorious evening; opening pair James and Griffiths looking to score quickly. Simon Light disposed of Griffiths for 4 when Kelvin Trent took an excellent running catch at mid-on but Kiwi Craig James was rampant at the other end and the score was already on 25 in the fourth over. Light finished 1-26 from his three over spell and at the other end Antony “Parse” Goodwin was bowling a superb spell including three maidens – one of them against the attacking batting of James; he finished 5-3-15-0.

Marc Whaley came in to the attack and got rid of Hill for 19, again caught by Trent, but the permatanned wonder was smashed all over the park and finished 1-43 from his three. Trent decided to take pace off the ball and called for Ryan Hewitt’s leg-spin; Chewy bowled with control until James took a liking to him and blasted two enormous straight sixes to long-off – He also lost the match ball (they’re £11 each you know). Glenn Tookey, ending a two-year absence from the Oddballs team came on and knocked over Ewan Grewal with his first ball in 31 months but James continued to score. Chewy eventually got his man as James played one shot too many to be well caught by (guess who) Trent again – The Kiwi left the field to applause from both teams with a score of 87 but a performance which really merited a hundred.

Charles Knight was run out by Parse in comedic fashion and the Cornwood momentum slowed down to leave them on 145-6 from twenty overs, a superb comeback from Oddballs as the Corns were at one point 101-3 from thirteen overs.

Trent asked the returning Tookey to open with him but there was no repeat of the dream bowling return for the “Saltash Express” as Tookey was castled first ball by Bees. Trent and Adam Nicholas put on 27 for the second wicket (three of them from Adam) before Trent was caught off of Grewal. In came Cornwood and Oddballs player Dan Stones to much chirp (rightly so), and when nicholas fell to Bees for 14 it looked like something special was needed.

An excellent partnership followed from Stones and Dan Newman and the two Dan’s (little & large) put together a 53 partnership before Stones saw his middle stump uprooted by Marker for a quickfire 32 from 18 balls.

Nathan Parsons was next in, on a run of three golden ducks in a row. His first ball was awkwardly edged away to point and Parsons celebrated with a two-handed bat salute for his innings which, for the first time in four games, would last at least two balls. Parsons scratched around for 7 off 16 before James came on and had him caught.

Newman still looked good at the other end and Oddballs needed 25 from the last four overs. Veteran nurdler Si Light joined Newman in the middle and they put together an excellent partnership to see Oddballs home. Light nudged it around for 5 from 10 but Newman played some excellent shots to finish 60 not out from 42 balls in a match-winning performance. It was a vintage display from Newman and his defining innings for the club.

Another bit of club history was made as Oddballs ran two fours (not a typo) with Newman involved in both, one with Stones and the other with Parsons!

Cup victory in the final over for P54's  P&D Cup